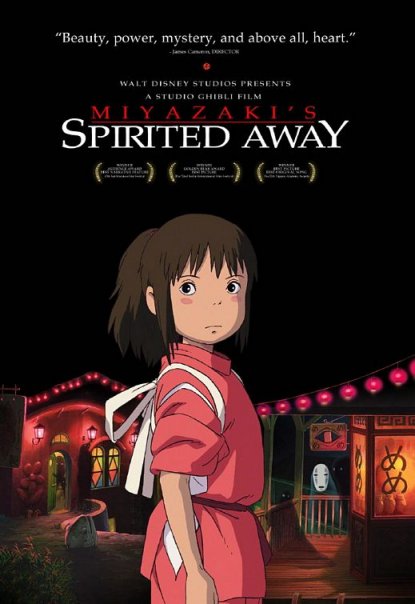 Anime often remains a mysterious artform to many not familiar with it, often thinking that cartoons are merely for children. However, the Japanese have made anime for both adults and children, sometimes combined into one.

While Spritied Away is a children’s story at heart, adults will recognize the moral values and life lessons woven into the plot, as the narrative is both emotionally turbulent and ultimately triumphant in its progression. Imagery and symbolism is rampant throughout, with the settings, characters and revelations often having deeper meaning than their initial apperances.

The film starts out with a whiny girl named Chihiro moving to her new home with her parents. As they stop at what seems to be an abandoned theme park, they are pleased to see that it appears to still be in operation. After Chihiro’s parents pig out (literally) on the food set out for guests, the theme park’s true nature is revealed and Chihiro is plunged into a world that only tbe brilliant mind of Miyasaki could produce.

The theme park is actually a gateway into a Japanese bath house for the spirit world, and a mortal girl like Chihiro is not welcome. After being given a pity job by Zeniba, the witch over ruling the establishment, she seeks to earn her freedom back as well as rescue her parents from certain death in the pig pen.

While adjusting to life at the bath house Chihiro meets a boy about her age who serves as Zeniba’s personal assistant of sorts, though his true identity is ultimately what sets the both of them free.

I love the manifestations of gentleness and generosity and goodness in Miyazaki’s works. Here, Chigiro helps a Faceless Spirit whose loneliness is a palpable things. The ride in the train at night is evocative and blends a sort of sadness and hope and resolve. The music chosen for this exceptional sequence is perfect–a haunting piano piece. The scene with the Stink monster who is not what he seems is at first remarkably amusing, then remarkably surprising–and yes, again, magical.

This is not a film you want to miss. It has strong family values (as does My Neighbor Totoro and Howl’s Moving Castle)(maybe my next review ;)), and hopefulness.

It’s just a total, utter treat for the eyes and ears and spirit of children and adults alike. But I especially recommend it for adults who’ve forgotten what it was like to be young and see wonders all around.